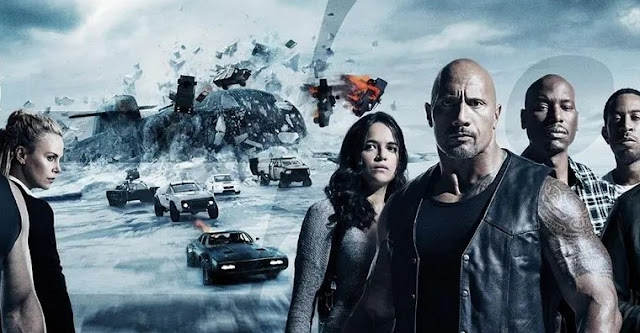 Fast and furious 8 review - Fast & Furious 8 begins the first half of the film according to audience expectations, car racing.

Dom (Vin Diesel) who is in Cuba must compete with Raldo (Celestine Cornielle) who has a problem with Dom's brother.

They ended the race with one keyword, namely "respect". Not long after, Cipher (Charlize Theron) appears and neatly leads Dom to meet him.

The cipher carries a malicious message of sedition that is very difficult for Dom to resist.

Elsewhere in the world, Hobbs ( Dwayne Johnson ), who retired early to coach his daughter's soccer team, reluctantly accepts an offer on a mission to steal valuable assets in Berlin.

Working with Dom's family team, they went to Berlin. However, the mission failed when Dom betrayed and made Hobbs languish in prison.

The surprise came when Hobbs met with Deckard Shaw ( Jason Statham ), his eternal enemy who was across from his holding cell. The next surprise occurred when Mr.

Fast & Furious 8 still presents an acceptable story with a premise that is still logical for the audience to digest. Not only relying on intense car chases, this film still manages the story structure neatly like the sequel to the previous film.

The conflict presented is indeed not far from family problems, especially in the character of Dom. Just look at the part where Cipher talks about the theory of persuasion to prevent Dom from pulling the trigger on Cipher's head.

Cipher's character is a breath of fresh air for this film because of all his actions that feel evil, both in words and deeds. Scriptwriter Chris Morgan and director F. Gary Gray cleverly made the character Cipher able to incite Dom to obey him like in mafia-themed films. The complete package of a terrorist in Cipher is proven by his expertise in the field of cybercrime.

The racing action in this film is presented intensely from the beginning of the film to the climax scene. Trying not to betray the sequel to its predecessor, which does focus on superior and sometimes illogical car chases.

Perhaps the striking difference in this film is the presence of a Ripsaw tank driven by Tej (Ludacris) on the Icelandic ice sheet. The chase scene with the submarine adds to the list of exciting scenes in the Fast & Furious franchise like Mad Max: Fury Road on ice.

The appearance of Helen Mirren as the mother of the Shaw brothers appears only as a complement to make the story run smoothly. Owen Shaw (Luke Evans) is forced to appear to help his brother on the plane.

The absence of several key figures such as Brian O'Connor (Paul Walker), Mia (Jordana Brewster), Han (Sung Kang), and Gisele (Gal Gadot) makes this film seem to lose balance. It's different when compared to the excitement in Fast Five (2011) when all the characters have their own strengths. Like the iconic scene when Dom and his friends raced using stolen police cars.

The rest of Fast & Furious 8 makes the audience return to the adrenaline that remains stunning with the sophistication of the visual effects of speeding cars. In this film, we will also be presented with classy fighting scenes from Jason Statham and Dwayne "The Rock" Johnson.